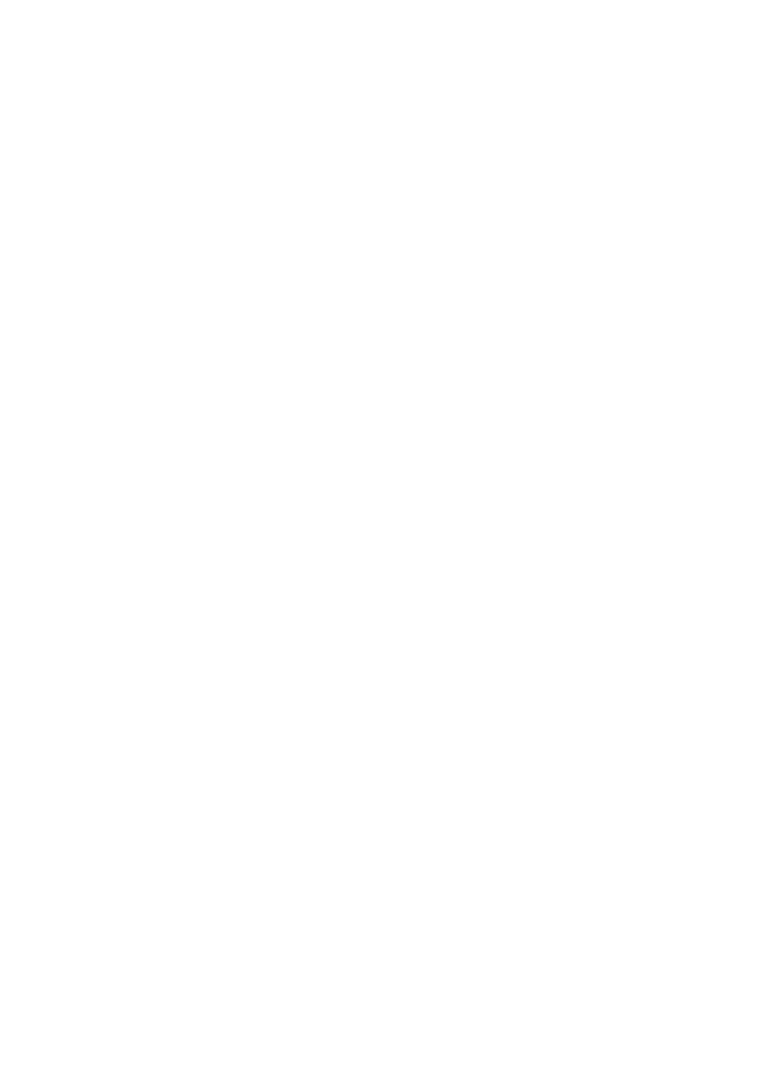 1.Data Structures & Algorithms
★ Data Structures
A data structure is a specialized format for organizing, processing, retrieving and storing
data. There are several basic and advanced types of data structures, all designed to
arrange data to suit a specific purpose. Data structures make it easy for users to access
and work with the data they need in appropriate ways. Most importantly, data structures
frame the organization of information so that machines and humans can better understand
it.
Why are data structures important?
Typical base data types, such as integers or floating-point values, that are available in
most computer programming languages are generally insufficient to capture the logical
intent for data processing and use. Yet applications that ingest, manipulate and produce
information must understand how data should be organized to simplify processing. Data
structures bring together the data elements in a logical way and facilitate the effective
use, persistence and sharing of data. They provide a formal model that describes the way
the data elements are organized.
Some examples of how data structures are used include the following:
● Storing data. Data structures are used for efficient data persistence, such as specifying
the collection of attributes and corresponding structures used to store records in a
database management system.
● Managing resources and services. Core operating system (OS) resources and
services are enabled through the use of data structures such as linked lists for memory
allocation, file directory management and file structure trees, as well as process
scheduling queues.
● Data exchange. Data structures define the organization of information shared between
applications, such as TCP/IP packets.
● Ordering and sorting. Data structures such as binary search trees -- also known as an
ordered or sorted binary tree -- provide efficient methods of sorting objects, such as
character strings used as tags. With data structures such as priority queues,
programmers can manage items organized according to a specific priority.
● Indexing. Even more sophisticated data structures such as B-trees are used to index
objects, such as those stored in a database. 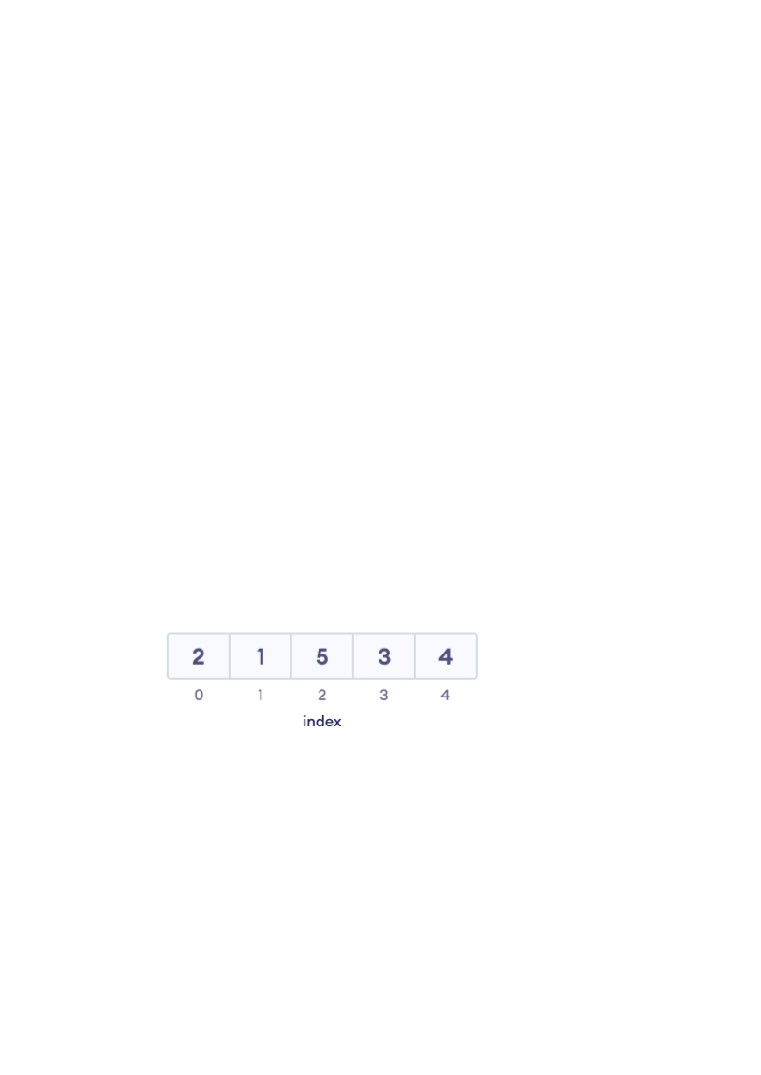 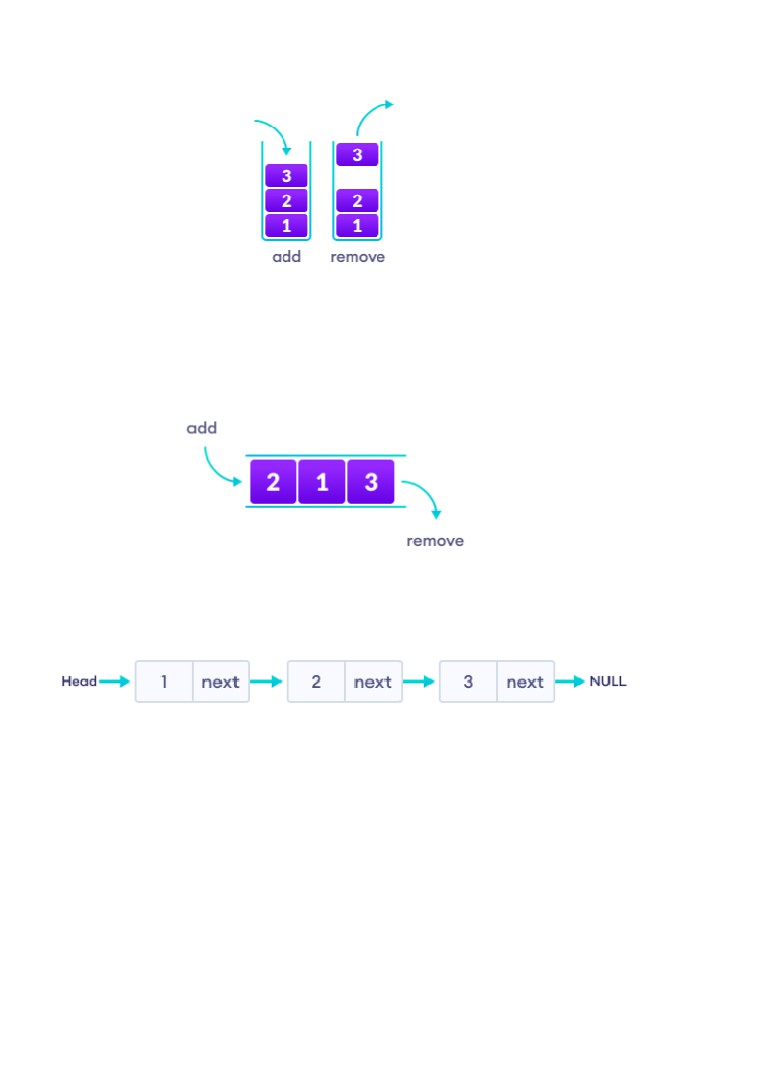 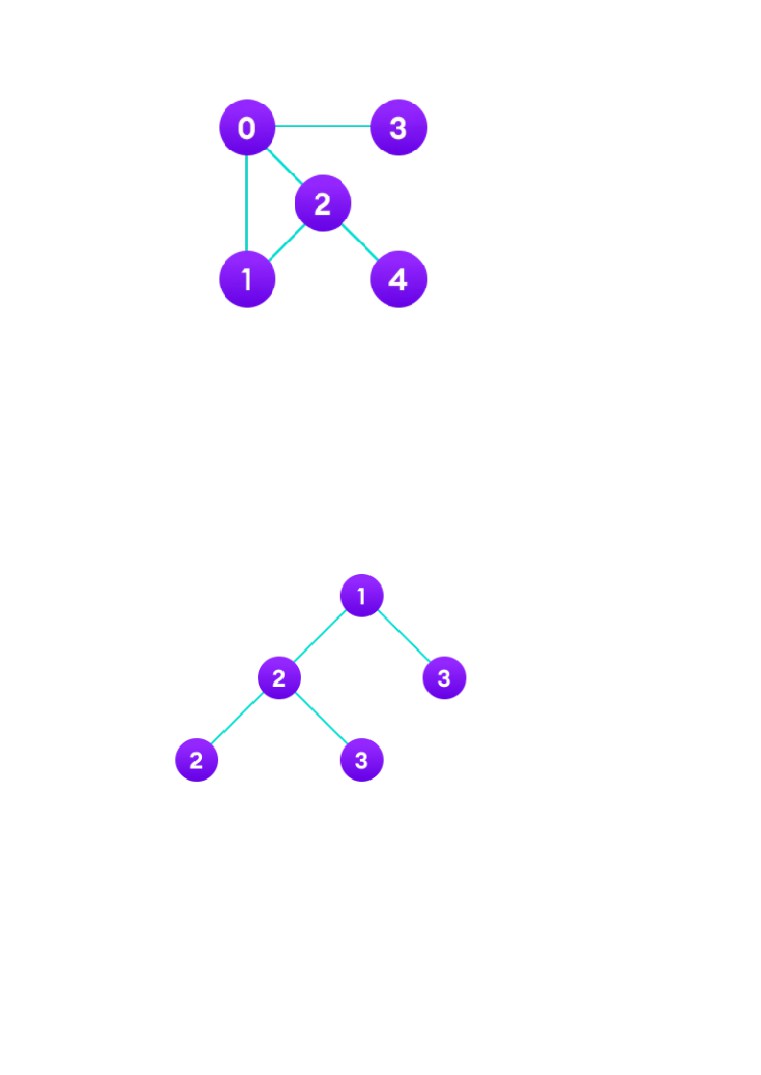 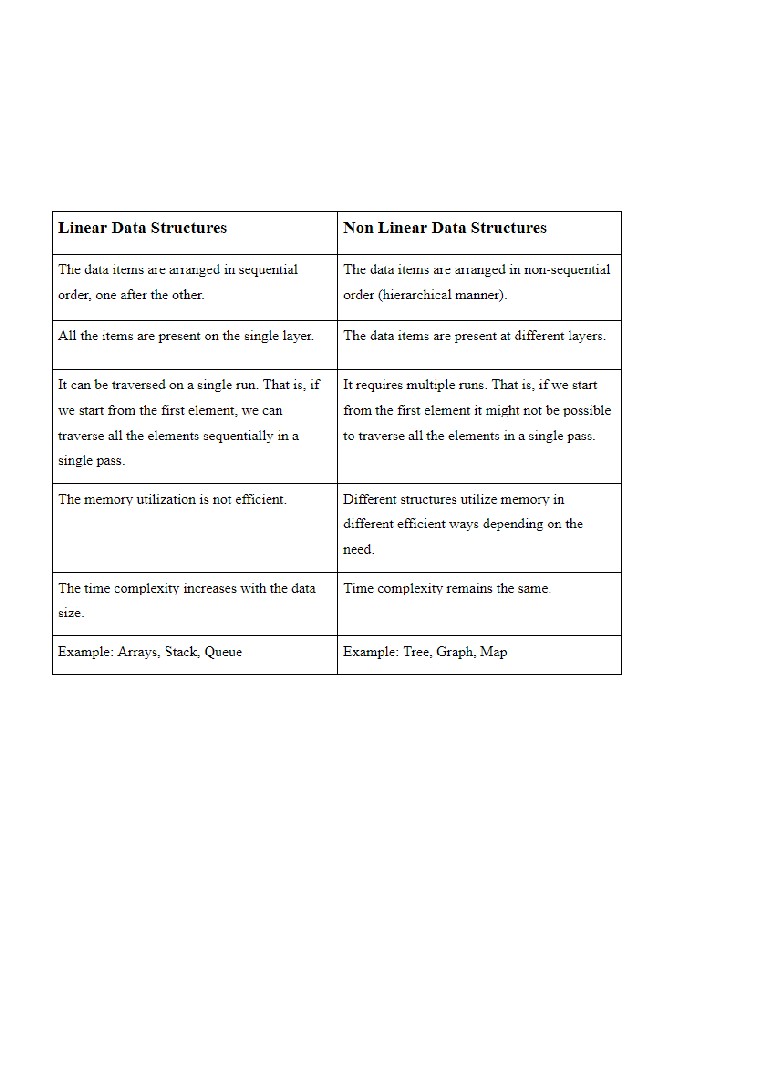 In computer programming terms, an algorithm is a set of well-defined instructions to
solve a particular problem. It takes a set of input and produces a desired output. For
example,
An algorithm to add two numbers:
1. Take two number inputs
2. Add numbers using the + operator
3. Display the result
Qualities of Good Algorithms
● Input and output should be defined precisely.
● Each step in the algorithm should be clear and unambiguous.
● Algorithms should be most effective among many different ways to solve a problem.
● An algorithm shouldn't include computer code. Instead, the algorithm should be
written in such a way that it can be used in different programming languages.
Algorithm 1: Add two numbers entered by the user
Step 1: Start
Step 2: Declare variables num1, num2 and sum.
Step 3: Read values num1 and num2.
Step 4: Add num1 and num2 and assign the result to sum.
sum←num1+num2
Step 5: Display sum
Step 6: Stop
Algorithm 2: Find the largest number among three numbers
Step 1: Start
Step 2: Declare variables a,b and c.
Step 3: Read variables a,b and c.
Step 4: If a > b
If a > c
Display a is the largest number.
Else
Display c is the largest number.
Else
If b > c
Display b is the largest number.
Else

In this example, the length of the list we create depends on the input value we provide for
n.
Let’s say adding a single integer to the list takes c space and other initial operations,
including creating a new list, takes d space. Then, we can create an equation for the space
taken by the above algorithm like this.
when n
-> c*n + d
when n = 10 -> c*10 + d
when n = 100 -> c*100 + d
The value calculated by this equation is the space the algorithm needs to complete
execution. The values of the constants c and d are outside of the control of the algorithm
and depend on factors such as programming language, hardware specifications, etc.
However, we don’t need the exact value this equation calculates to talk about the space
complexity of an algorithm. Instead, we use the highest order of the variable n as a
representative of the space complexity.
For example, the above algorithm has a space complexity in the order of n. If another
algorithm has the equation c*n2 + d*n + e for space it needs, we say it has an order of n2
space complexity.
Time Complexity
Time complexity is the number of elementary operations an algorithm performs in
relation to the input size. Here, we count the number of operations, instead of time itself,
based on the assumption that each operation takes a fixed amount of time to complete.
If we look at the previous algorithm again, it performs n number of operations (n
iterations of the loop) to complete its execution.
If we construct a similar equation for time complexity as we did before, it also takes the
shape of c*n + d, with c as the fixed time taken for each loop iteration and d as the fixed
time taken for other initial operations.
Therefore, the time complexity of this algorithm is also in the order of n.
Asymptotic Analysis
As you saw in these examples, we can’t compare one algorithm to another using exact
values because they depend on the tools we use and underlying hardware. In fact, if we
calculated time and space values for two instances of running the same algorithm on the

same system, there would be differences in the values we get due to subtle changes in the
system environment.
Therefore, we use Asymptotic Analysis to compare the space and time complexity of two
algorithms. It analyzes the performance of an algorithm against the input size. It
evaluates how the performance changes as the input size increases. This type of analysis
doesn’t need actual values for space or time taken by the algorithm for comparison.
Best, Worst, and Average Cases
Usually, in asymptotic analysis, we consider three cases when analyzing an algorithm:
best, worst, and average.
To understand each case, let’s take an example of a linear search algorithm. We use a
simple for loop to search if a given integer k is present in a list named nums of size n.
def linear_search(nums, n, k):
for i in range(n):
if k == nums[i]:
return i
return -1
Let’s consider what are the best, worst, and average case scenarios for this algorithm in
terms of time complexity (We can talk about these three scenarios in terms of space
complexity too).
Best Case
We consider the combination of inputs that allows the algorithm to complete its execution
in the minimum amount of time as the best-case scenario in terms of time complexity.
The execution time in this case acts as a lower bound to the time complexity of the
algorithm.
In linear search, the best-case scenario occurs when k is stored at the 0th index of the list.
In this case, the algorithm can complete execution after only one iteration of the for loop.
nums = [1, 2, 3, 4, 5, 6]
n = 6
k = 1 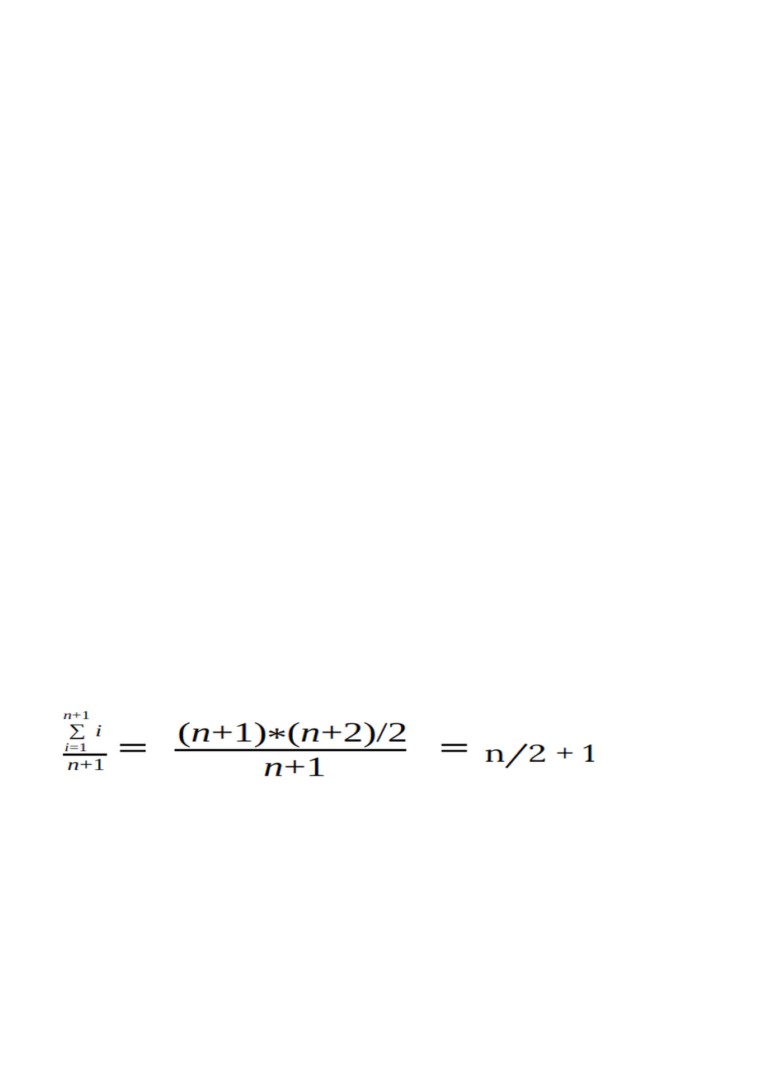