2. Which are the different types of Mechanics? 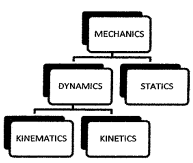 3. What is RIGID BODY?
Ans: On the application of force, the body does not change its size

4.What is Particle?
Ans: Considerable mass but Negligible Dimension

5. Newton’s First Law of Motion
Ans: Every Body continues in its state of rest or in uniform motion in an in a straight line unless it is acted upon by an unbalanced force

6. Newton’s Second Law of Motion
Ans: The rate of change of momentum is directly proportional to the impressed force and takes place in the direction of Force.

7. Newton’s Third Law of Motion
Ans: For every action, there is the equal and opposite reaction

1. What is FORCE
Ans. Force is defined as an agency that tends to change the state of rest or of uniform motion of a Body. Force is a Vector Quantity.

2. Characteristics of a Force?
Ans. 1) Magnitude
2) Direction
3) Point Of Application
4) Line of Action: Line along which force acts.

3. Unit of Force: S1 unit of force is Newton (N) or Kilo Newton.
Ans. 1 Newton force is defined as the force required to produce an acceleration Of 1 m/s².

2) Non-Coplanar force: Forces lies in more than one plane

5. What is the External Effect of a Force
Ans. Force when applied on a body, may change or tend to change the state of rest or in state of motion of a body.

6. What is Internal Effect of Force:
Ans: Under the application of forces on a body internal stresses get set up in the body due to which the body deforms

7. What is System of Force?
Ans: It is a group of forces under consideration

8. What is the Law of Parallelogram?
Ans: If Two forces acting at a point can be represented in magnitude and direction by two adjacent sides of a parallelogram, drawn from one of its angular points, they’re resultant by the diagonal of the parallelogram passing through that angular point.

9. What is the Law of Triangle?

Ans: If Two forces acting at a point are represented in magnitude and direction by the two sides of a triangle taken in order their resultant is represented by the third side taken on opposite order.

10. What is RESULTANT
Ans: It is the single force that replaces all the forces acting on a system.

11. What is the Resolution of force
Ans: The way of representing a single force into a number of forces without changing its effect on the body.

12. What is Equilibrant
Ans: The equilibrant of two or more forces acting on a body is a single force which when acting with other forces keeps the body in equilibrium.

14. State Superposition Principle?
Ans: If more than one force acts on an object, the combined effect due to all the forces is the vector addition of all the individual’s effects.

16. Define Couple?
Ans: Two non-collinear parallel forces having the same magnitude but opposite direction forms a couple. The couple is a free vector

18. Distinguish Between A Couple and Moment?
Ans: Moment represented turning effect of a force whereas couple consists of two equal and opposite forces separated by some distance. The moment of force varies from point to point. The couple is the same about any point in the plane

Equilibrium of System of Coplanar Forces

1. What is Equilibrium
Ans: If the resultant of the force system is ZERO, syster\m is said to be in Equilibrium.

2. Condition of Equilibrium
Ans: EF=0&EF-0(Body can not translate) EM-0(Body does not Rotate)

4. Explain FREE BOGY DIAGRAM (FBD)?
Ans: It is a diagram of the body under consideration showing all forces, active and reactive acting on the body F80 gives a simple idea about the system of forces acting on a body. We are isolating the body From surrounding and then shows all forces acting on it.

6. What is a BEAM
Ans: The beam is a structural member subjected to transverse loading only.

7. What is MEMBER
Ans: A two force straight member is always in tension or compression

10. What is Truss?
Ans: It is designed to support the load and usually stationary member of a truss is a 2 force member

1. For constant velocity acceleration of a body is zero

2. Distance-displacements when the body moves in only one direction of motion

3. For Maximum or minimum velocity acceleration of a body is zero

7. Area under a-t diagram gives the change in velocity.

1. What is kinematics?
Ans: The branch of mechanics is concerned with the motion of objects without reference to the forces which cause the motion.

3. What are the different types of rigid body motions?
Ans:

6. Define Axis of rotation
Ans: The straight line through all fixed points of a rotating rigid body around which all other points of the body move in circles

9.What is the instantaneous Centre Method?
Ans: Instantaneous centre is defined as the point about which the G.P. the body rotates at the given instant.

10. What is a three-dimensional motion?
Ans: In this type of rigid body motion, the body rotates about a fixed point, but the axis of rotation passing through the fixed point is not stationary as its direction keeps on changing.

Kinematics of Particle : Work and Energy

1. What is Friction
Ans: It May be defined as a resistive force acting opposite direction to motion. Frictional force (F) always acts along surfaces, the unit of friction is N.

2. VERGE OF MOTION or IMPENDING MOTION
Ans: For a body, there will be the value of Frictional force up to and body is in equilibrium. Maximum Frictional force is called LIMITING FRICTION. The state of the body is called impending motion.

3. Angle of friction
Ans: The angle between Normal reaction and the resultant reaction tan u

4. Cone of friction
Ans: It is an imaginary cone generated by revolving resultant reaction about the normal reaction

5. LAW OF FRICTION
Ans: The frictional force is always opposite to the direction of motion, Friction is independent of the area of contact Ratio of limiting Frictional force F and normal reaction N is constant.

7. What is Centre of Gravity
Ans: It is the point through which the whole weight of a body is supposed to act.

8. What is Centroid
Ans: A term used for CG of all plane geometrical figures.

9. What is  Avis of symmetry
Ans: Fine which divides a figure into two equal parts, such that each part is the mirror image of other

1. Spring force: Force in spring Is variable as it is proportional to deformation X and directed towards the neutral position.

2. Impulse: Is the Product of force and duration for which its acts.

4. Impulse Momentum Equation: The momentum of a body changes and the change in momentum is equal to the impulse produced by force.

5. Impact: The collision of two bodies takes place during the very short interval

6. Central impact: Mass centres of both bodies are in the line with the impact

7. Oblique Impact: Mass centres of both bodies are NOT in line with the impact